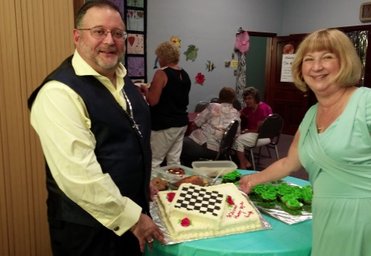 Pastor Mike was born in Queens, New York city. When he was 13 years old the family moved to Englishtown, New Jersey. PM has 2 brothers and one sister. He attended Dickinson College in Carlisle, PA, earning a Bachelor of Science degree in Biology and Computer Science, graduating in 1980. He worked in various computer engineering and management positions from 1977 to 1999; Dickinson College, Rite Aid, Allis-Chalmers Hydro Turbine, Electric Modules Corporation, General Defense (Red Lion), Warner-Lambert. Also he was an adjunct instructor of computer science at York College from 1981-1986.

At the age of 37 he was baptized into the faith. In 1999 he left secular employment. The Bishop appointed him to St. Paul UMC Manchester as the associate pastor. At the same time he earned his Master's of Divinity degree from Lancaster Theological Seminary, graduating in 2002. PM was ordained an elder in the United Methodist church in May 2005. He earned his Doctorate in Ministry from Gordon-Conwell Theological Seminary at Charlotte, NC, graduating in May 2008. He has served Bethel UMC in "the" Brogue, Calvary UMC in Dillsburg, Calvary UMC in York city and is proud to be coming to serve at Bethany UMC in Felton.

PM and Sandy met at Dickinson College and married in December 1980, they have three children, two girls and a boy; one grandson and another grandson expected to be born in mid-August this year. Inside the church PM enjoys doing biblical research using as many resources he can get his hands on. Outside the church he is an avid chess player being a rated USCF (United States Chess Federation) tournament player, certified tournament director, and certified scholastic chess coach. He founded and runs the scholastic chess club the Royal Rooks. He also dabbles in close up card and coin magic.

GET IN TOUCH WITH US